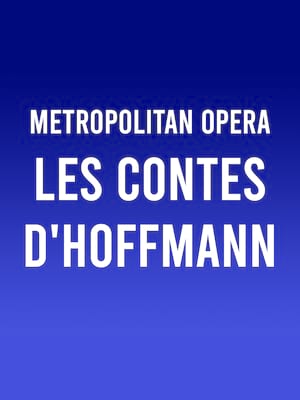 The last opera by Jacques Offenbach

The Metropolitan Opera present their take on the tales of the enigmatic Hoffman and his life and loves. From the delicate automaton Olympia to the beguiling courtesan Giulietta, we're drawn in to a fantastical world, learning how one man deals with the power of love and its many faces. A playful work filled with romance and fairytale elements, Les Contes D'Hoffman was Jacques Offenbach last work before his death, premiereing in 1881, and has since become the French composer's signature opera.

This lush production is directed by Tony-winning musical theatre mastermind Bartlett Sher, whose work was last seen on Broadway in the acclaimed revival of Fiddler on the roof. Playing the role of the tortured central character is Vittorio Grigolo, while Johannes Debus conducts.

3 hours and 38 minutes, with two intermissions

Sung in French, with English, German and Spanish Met titles