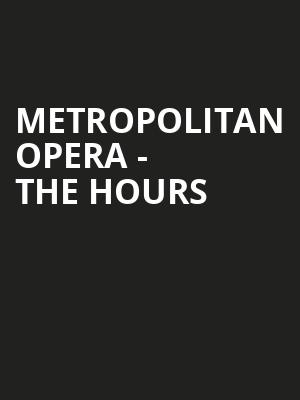 All images, logos, and graphics are property of the production

Why See Metropolitan Opera - The Hours?

A trio of three powerhouse performers, Renee Fleming, Kelli O'Hara, and Joyce DiDonato, unite on the Met Opera House stage to lead this much anticipated World Premiere production of Kevin Puts's adaptation of Michael Cunningham's Pulitzer Prize-winning novel. Inspired by Virginia Woolf's landmark 1925 work Mrs Dalloway and the Oscar-winning film adaptation of the same name, The Hours looks at three generations of women across 20th Century America, and the challenges they face as they try to discover their place, and make peace with themselves. Directed by Phelim McDermott, expect a highly compelling piece that will stay with you long after you leave the auditorium.

Set over the course of one day, The Hours is the story of three women grappling with their place in the world. Interweaving their actions, we're introduced to New Yorker Clarissa, who is planning a party for an ill friend in 2001, while at the same time in 1951, Californian housewife Laura is a victim of the post-war American Dream. While they are battling their own demons, we meet Virginia Woolf herself in 1920s England, as she finishes the book in the face of her own tumultuous mental health.

These three women singing on the same stage this piece that reinterprets... more

Waited a long time for this. Opening night was ok. Fleming, DiDonato and... more