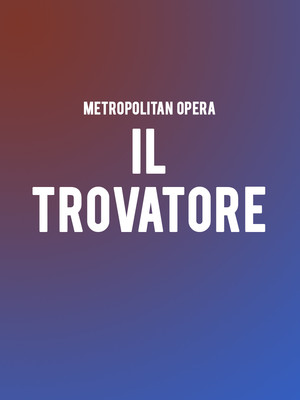 The opera performances that move, excite and delight us most are not always the ones we think they will be...

One of Verdi's most outlandish operas returns to the Met guided by the capable hands of Sir David McVicar. A vivid production tells of mistaken identity, obsessive love and horrifying tragedy, playing against a backdrop of the Spanish Civil War. Gypsies, counts, troubadours and noblewomen all cross paths in a breakneck tale of revenge. Sonya Yoncheva and Krassimira Stoyanova will both share the role of Leonora.

Much of the story is given in exposition at the beginning, as they pertain to events that happen long before the opera's storyline. Two men vie for the love of noblewoman Leonora; one the irascible Count di Luna who is dangerously obsessed with her; the other, Manrico, a gypsy-born troubadour who serenades her at night. The two come to blows in a duel; Manrico gains the upper hand, but something stays his hand - what is it about the Count that stopped him from killing him?

The gypsy woman tends her son Manrico when he is injured in battle, and imparts a horrific secret - taking revenge on the count's family for her mother's death, she had mistakenly thrown her own child on the pyre and had him burnt. She then kidnapped Manrico instead and raised him as her own.

Things come to a head when Manrico and Leonora try to get married; they are ambushed by the Count and his forces. Sentencing Manrico to death, the Count is approached by a tearful Leonora, who begs him to spare Manrico's life; in return, she will marry the Count. But will Leonora keep her promise to him, or does she have another plan in store? And will the Count ever discover Manrico's true identity before his death sentence is carried out?

Two hours and 51 minutes with one intermission