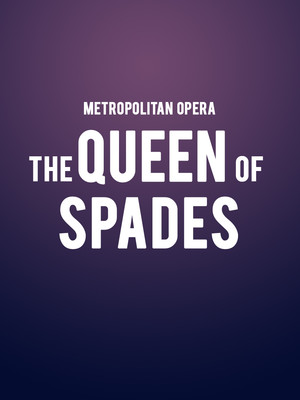 Metropolitan Opera - The Queen of Spades

Life is but a game

Why See Metropolitan Opera - The Queen of Spades?

Back at the met for the first time since 2011

One man's dangerous obsession with winning at the card tables drives this devastating tale of terror from Pytor and Modest Tchaikovsky, marking its first Met performances since 2011. In a sweeping production from Elijah Moshinsky, we're taken back to the St. Petersburgh of Catherine The Great, where opulence and terror walk hand in hand as we follow a desperate soldier whose mission to rise above his station via the gaming tables proves to be his chaotic undoing. Bursting with Russian romanticism, The Queen of Spades is an intense and sweeping work that asks how high would you bet on the odds of success.

Starring Aleksandrs Antonenko as Hermann, Lise Davidson as his devastated lover Lisa and Larissa Diadkova as the Countess, the titular Queen of Spades, who Herman hounds for the secrets of the cards.

Sung in Russian with Met titles in English, German, Spanish and Italian

Three hours and 55 minutes with one intermission

Seen Metropolitan Opera - The Queen of Spades? Loved it? Hated it?