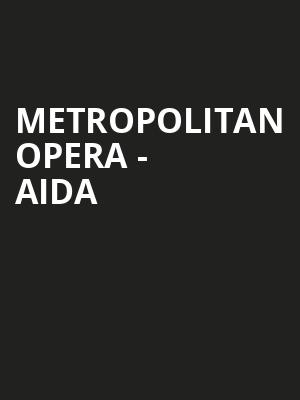 The Egyptian-inspired epic returns to delight audiences once more as part of the Metrophiliant Opera's 2022/23 season. The story of an Ethiopian princess caught in a love triangle with the heroic Radames, be swept up by Verdi's monumental score and the shimmering glory of this world-class production by Sonja Frisell, starring Latonia Moore as the titular Aida.

What is Aida about?

Set in Ancient Egypt, the story centers around the conflict between forbidden love and hatred for one's enemies. Aida, a seemingly lowly Ethiopian slave girl is in love with her Egyptian captor Radames, a distinguished warrior on the battlefield. Unbeknownst to everyone, she is the captured princess from Ethiopia, whose furious father is on his way to rescue her, laying waste to Egypt in his path.

Adding to the danger is Amneris, the Egyptian princess, who, despite her intense love for Radames, cannot shake the feeling that the mysterious Aida just may be her rival in love...

Sung in Italian with English, German, Spanish and Italian Met Titles. Images used are from a previous production of Aida.