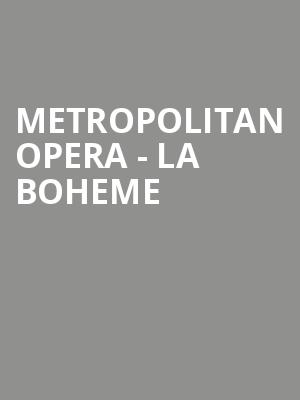 The Metropolitan Opera's production of La Boheme, Puccini's masterpiece of emotional manipulation, is like any institution: it transcends the people, good or bad, who move through it

Franco Zeffirelli's spectacular production returns to the Met once more, this time celebrating its 40th anniversary with the company. One of the most recognizable productions in the world, Zeffirelli's La Boheme has grown into one of the most beloved Met traditions. Prepare to be transported to the snowy streets of 19th Century Paris, where Puccini's group of ill-fated bohemians collide in this epic tale of romance and tragedy that echoes through the ages.

A four-act tragedy, the story delves into 1830s Paris where a group of struggling artists lives in destitute slum conditions, yet are determined to celebrate love in all its simple glory. When Rodolfo helps his pretty neighbor Mimi to find her keys in the dark, their hands touch, and attraction flares within them.

The story then moves on over the course of a few months, where Mimi is found to be terminally ill from consumption; despite having broken up, Rodolfo cares for her deeply and is heartbroken to hear that she is dying. He carries her upstairs to his couch and caresses her, as she slips away in his arms.

Fantastic staging and performances except for Mimi more