Sorry, it looks like Metropolitan Opera: Die Frau ohne Schatten is no longer happening on these dates 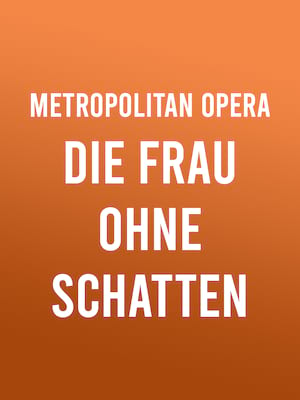 An overwhelming artistic experience. It's how you dream opera ought to be.

A legendary production directed by the late Herbert Wernicke returns to the Met. The fantastical genius of the Strauss score and the Hofmannsthal libretto will be interpreted by conductor Yannick Nzet-Sguin and a thrilling cast. This musically demanding opera features a stellar cast of performers, including Klaus Florian Vogt and Elza van den Heever as the Emperor and Empress.

Set in a mythical empire, Die Frau ohne Schatten is an opera of love and loyalty in the shadow of an invisible god, Keikobad. Strauss wrote the opera over 100 years ago, today it has become one of the most challenging - and rewarding - opera to be brought to life on stage! This production by Herbert Wernicke was last seen at the Met in 2013, and is set to be a treat for opera fans.

Sung in German with Met Titles in English, Spanish and Italian