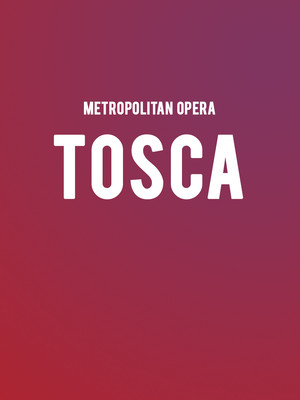 At last, the Met has a Tosca that it can bank on again and again in the coming years. And it should: if any piece deserves an unshakeable pedestal in the standard repertoire, it's Puccini's Tosca, which on a frigid New Year's Eve proved the intense and d

Undoubtedly the most highly regarded and beloved works in the canon, Puccini's tragic tale of revenge and murder returns to the Met in Sir David McVicar's stunning production. Returning to the production will be soprano Anna Netrebko who was titled as "magnificent" (New York Times) when she debuted the role in 2018. Sit back and be transported to Rome on the edge of invasion in this marvelous melodrama. As perfect for first-timers as it is for seasoned audiences.

Under the cloud of rebellion on all sides, Rome is in the middle of a tumultuous change as the Royalist regime is winning over the Republic. Whilst the merciless Baron Scarpia is rounding up rebels and jailing them, Tosca rehearses in a church before meeting her fugitive lover Cavaradossi. When the embittered Baron catches up with him he falls for Tosca, much to her anger, and tortures her lover in front of him. If she yields to him, she is promised his life under the guise of a false execution. But Scarpia's meanness knows no bounds and before the day is out, all life will be extinguished.

Sung in Italian with Met Titles in English, Spanish, Italian and German

Fantastic. Superb singing, sets and costumes.. Would like to see s show... more