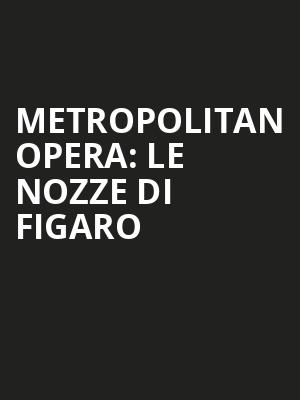 A ravishing, intricately wrought evening of music, humor and emotional depth. An evening like this is the strongest argument for the continued vigor of the Met.

Mozart's Le Nozze di Figaro returns to the Met, in this brilliant 1930's set production by Sir Richard Eyre. Yet another madcap escapade, we re-join the iconic characters of Figaro, Rosina, and Count Almivira from The Barber of Seville, and the servants that have to outwit their increasingly outrageous behavior as the titular valet's nuptials approach. Two casts will take on Nozze, conducted by Yannick Nezet- Seguin and starring Ryan Mckinny, Christian Van Horn, Christian Gerhaher, Gerald Finley, Christiane Karg, Federica Lombardi, Lucy Crowe, and Aida Garrifullina.

It's a complicated plot, so we have decided to break it down as much as possible without giving too much away! We catch up with our heroes Figaro and Susannah, who are at last to be married. However, they haven't counted on the arrival of several nefarious characters, including the Count, Marcellina, and Dr. Bartolo, each determined to break up the happy couple and have them for themselves. However, even more, trouble arrives in the shape of the handsome teenager Cherubino, who is also determined to have Susannah - but he also declares his love to all the women in the house.

Meanwhile, the Count and Figaro engage in a dangerous yet hilarious war of pranks, including disguises and marriage contracts. Marcellina, Dr. Bartolo's former housekeeper discovers a secret about Figaro which stops her seduction of him. However, Susannah sees its embrace and misconstrues the situation entirely. Together with the Countess, the two conspire to make their husbands realize how much they are loved, and to put a stop to the farcical dalliances once and for all!

Three hours and 21 minutes with one intermission