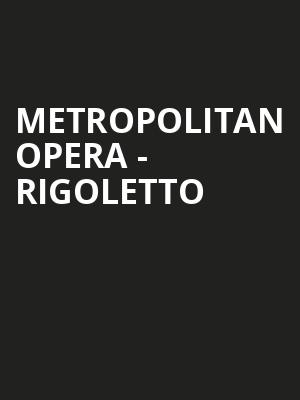 A wicked tale of wicked men

Multi-Tony Award-winning Director Barlett Sher's hit production of Verdi's powerful tragedy sees 1500s Mantua updated to the 1920s, with Art Deco-inspired sets and fantastic period costumes. Holding up a mirror to the eternal conflict of depravity and innocence, it's a boiling pot of revenge, punctuated by some of the great composer's most thrilling and unforgettable music.

The ultimate tale of jealousy, vengeance and sacrifice, Rigoletto follows the misfortunes of its titular character. A clown (now a cruel henchman) in the court of the Duke (now a Vegas impresario), he's extremely skilled at humiliating courtiers, much to the amusement of the Duke. Yet when his sharp tongue goes too far and the lustful Duke seduces his beloved daughter Gilda, a spiral of devastation consumes them all as Rigoletto tries anything to protect her innocence.

sung in Italian with titles in English, German, Italian and Spanish

Loved it! Great performances by all. more

Christina: “Why Opera is dying”

This is the reason that Opera is dying. Because a few unimaginative people... more