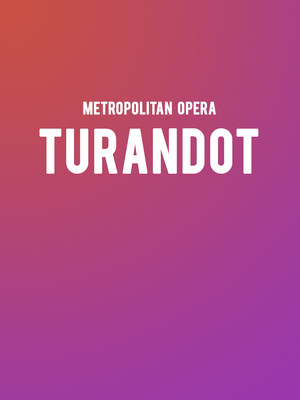 Puccini's Classic is back!

A welcome return to the met opera

Sworn against love by the death of her mother, proud Princess Turandot prefers watching her suitors meet a grisly end and having their heads placed on spikes at the palace gates, yet they still vie to win her hand. When Calaf takes up the challenge, the unattainable beauty may have met her match in this lavish spectacle and final masterpiece from Puccini. Oksana Dyka and Martina Serafin alternate the role of bloody beauty Turandot, opposite Marcelo Alvarez as Calaf.

Widely known an epic grand opera and origin of 'Nessun Dorma', Turandot takes place in a fantasy, fairy tale version of ancient China, with the Princess carrying out her bloody reign over Peking (now Beijing.) Franco Zeffirelli's opulent production embodies the spirit of this strange tale of ruthlessness and love hard won.

Sung in Italian with English, German, Italian and Spanish titles.

Wear waterproof mascara. Liu will break your heart! The production is gorgeous... more