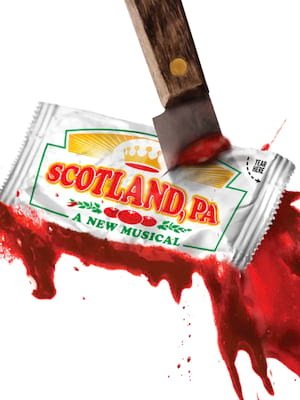 Billy Morrissette's early naughties cult hit is heading off-Broadway this fall in a brand new musical adaptation! Released in 2001, Scotland, PA fuses Shakspeare's Macbeth with a failing burger joint in the hamlet of Scotland, Pensylvania. Commissioned by the Roundabout Theatre Company Scotland, PA features an original score by Adam Gwon and will be directed by Sunset Boulevard's Lonny Price!

When Joe "Mac" McBeth gets passed over for a promotion at the failing Duncan's burger joint he and his wife Pat take matters into their own hands. Convinced that they could do a better job than Norm (the restaurant's owner) the duo hatch a devious plan and to get their mitts on Duncan's, and transform it into a popular drive-thru. Will their plan succeed or will it come to a bloody end?

Two hours and 15 minutes, including a 15-minute intermission.

It felt fresh and original, with great lyrics, music that can be remembered,... more

H David: “Not bad but not good either”

Saw a matinee performance of a new musical SCOTLAND PA at the Roundabout.... more

Sound good to you? Share this page on social media and let your friends know about Scotland, PA at Laura Pels Theater.