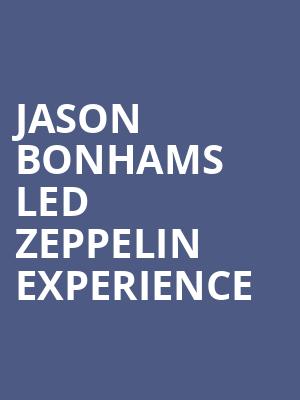 The ultimate tribute to a rock star father

Jason Bonham's Led Zeppelin Experience will celebrate the life and music of his father - the legendary Led Zeppelin drummer John Bonham. The incorporates multimedia aspects into the concerts, including rarely seen home movies of him and his dad, plus anecdotes from his life, giving background context to the songs that he chooses to perform. All these elements combine for a truly heartfelt show that is more than a tribute concert, without bombarding the audience with filler. Jason Bonhams Led Zeppelin Experience is on tour and hits the in ,

The band No Quarter's passion for the music is evident as they perform in front of a giant wall of video screens that display futuristic art and mood-setting historical video footage and photos. The energy is palpable as the stunning atmosphere and powerful live performance takes the audience to the point of sensory overload. This is a rock show and much, much more!

Great show my second time ,music quality excellent his dad would be... more

This show was the best I’ve seen to date. Seen many other cover bands,... more

Sound good to you? Share this page on social media and let your friends know about Jason Bonhams Led Zeppelin Experience at Wellmont Theatre.