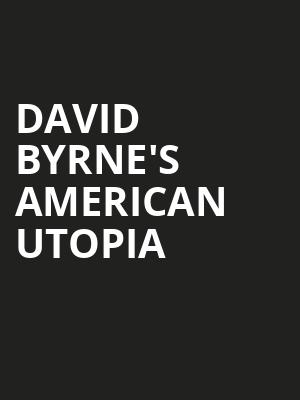 A BRoadway return for David Byrne

After thrilling fans, and garnering much critical acclaim, earlier this year former Talking Heads frontman and all-around excellent human David Byrne graces us with a very special second Broadway engagement of his theatrical concert, American Utopia. In typical Byrne style, expect a spectacle that combines his musicianship, artistry, and delightfully off-beat nature as he presents favorites old and new in this highly acclaimed show.

As a leader of the New Wave scene in the late 70s and early '80s, Byrne has enjoyed enduring success firstly with Talking Heads and then as a solo artist, filmmaker, photographer, activist, and writer. A friend of Bowie and collaborator with Brian Eno (who featured on American Utopia's lead single "Everybody's Coming to My House") his perpetual zeal for creating has cemented him as a true auteur, an icon of the modern age.

Released in March 2018, American Utopia marked Byrne's seventh solo record and his first to hit the Billboard Album Chart #1 spot. Translated for the stage alongside Alex Timbers and Annie-B Pearson, expect a minimalist masterpiece that offers an unmissable journey into his unique life and career.

Images used are from the original Broadway production of David Byrne's American Utopia and may not reflect the current cast.

Sound good to you? Share this page on social media and let your friends know about David Byrne's American Utopia at Venue To Be Announced.