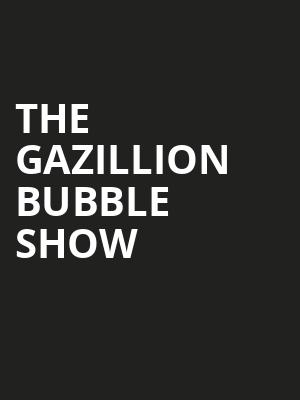 Take the journey of a lifetime and step into the unbubblelievable magical kingdom of FAN YANGs GAZILLION BUBBLE SHOW!

Why See The Gazillion Bubble Show?

Guinness World Record holder Fan Yang is the king of bubbles! Practising his art since his late teens, he's taking bubble magic to a whole new level, performing on Oprah, Ellen and The Late Show, where David Letterman branded him 'The Greatest Bubble Artist in the World'.

Alongside his talented family members, Fan took his show Off-Broadway in 2007. Initially a limited run, the huge demand has meant to it's been playing at the World Stages ever since. Featuring fantastic next-level laser lighting displays, and a great musical score, The Gazillion Bubble Show is an hour plus of unbelievable soapy masterpieces, which float above the audiences heads in their hundreds and even fully enclose some lucky volunteers.

The Fan Yang Gazillion Bubble Show is appropriate for children of all ages. Everyone must have a ticket however there are reduced priced Lap Tickets available in person at the Box Office for children under the age of 2 who will be sitting in their parent or guardian's lap (cash only).

1 hour and 15 minutes with no intermission.

Seen The Gazillion Bubble Show? Loved it? Hated it?

Sound good to you? Share this page on social media and let your friends know about The Gazillion Bubble Show at Stage 2 New World Stages.