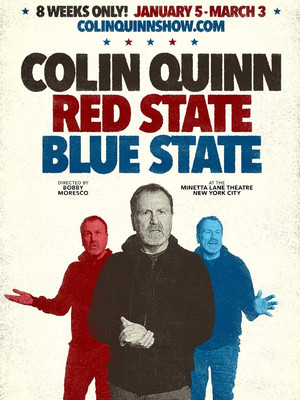 He toes no one's line, yet he comes across as the kind of guy you might like to have a beer with

No side of the political divide is safe from Colin Quinn's satirical eye in his new one man show. Following on from his Broadway and Off-Broadway shows New York Story and Long Story Short, Red State Blue State ponders the absurdities that can be found on both sides of the aisle. This Minetta Lane Theater staging, produced by Audible, is directed by Bobby Moresco.

Alongside his previous theatrical ventures, Quinn is probably still best known for his tenure on SNL, during which he created the character Lenny the Lion and hosted Weekend Update. He has a whole load of film credits to his name, including Trainwreck, Grown Ups, and has been called the quintessential New York comedian by Jerry Seinfeld.

Recommended for ages 13 and over

75 minutes with no intermission

Sound good to you? Share this page on social media and let your friends know about Red State Blue State at Minetta Lane Theater.