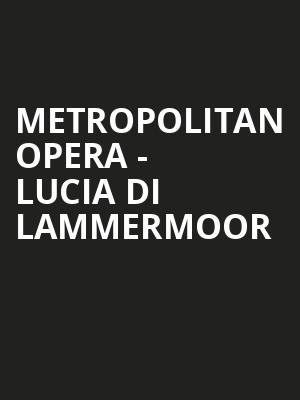 Heartbreak and hell in the highlands

Soprano Nadine Sierra steps into the role of Donizetti's fragile and unhinged heroine in Simon Stone's thrilling new production of Donizetti's Lucia di Lammermoor. Haunting and tragic, we're taken into the world of the young Lucia, a woman forcibly separated from her secret lover to marry another against her will. One of the most dramatic and bloody operas there is, strap in for an evening you'll not soon forget!

The romantic wilds of 19th century Scotland come to life in Simon Stone's searing production of Donizetti's shocking tale of madness and murder. As the only daughter of the Lammermoor clan, the fragile Lucia is expected to marry tactically into a local family against her own wishes, and that of her secret lover Edgardo, a member of the Ravenswoods, the sworn enemies of the Lammermoors.

When Edgardo is despatched to France on business, Lucia's brother forces her to wed, an action that leads the desolate young woman to strike out in bloody revenge.

Sung in Italian with Met Titles in Italian, German, English and Spanish

It's true the production isn't the best but Pretty Yende and Michael Fabiano... more

I absolutely loved (almost) everything about it. I could not disagree more... more