Sorry! You missed The Original Misfits at Madison Square Garden 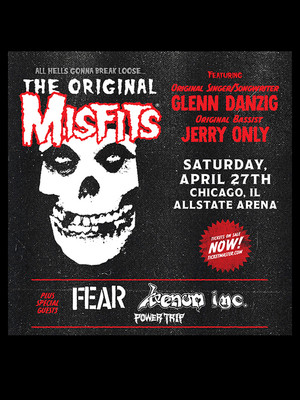 The hits you love!

Why See The Original Misfits?

The punk legends live on! After only six short years together, horror punk progenitors The Misfits hung up their axes and put away their face paint. They did, however, leave a rich legacy that influenced many bands, including heavy metal titans Metallica and hard rock icons Guns 'N Roses! Fusing theatrical, campy fun with gory horror film imagery, dark lyrical themes and the distinctive, gruff vocal of frontman Glenn Danzig, the band amassed a cult following during their first iteration 1977 to 1983, releasing seminal albums Walk Among US and Earth A.D./Wolf's Blood.

Since 2016, a few of the original members have come together to play rare reunion shows over the years - don't miss your chance to see them in once again when they unleash their sonic hellfire for another sinful night! Danzig himself will be accompanied by founding bassist Jerry Only, performing sleeper hits like Vampira, Night Of The Living Dead and Devilock.

Sound good to you? Share this page on social media and let your friends know about The Original Misfits at Madison Square Garden.