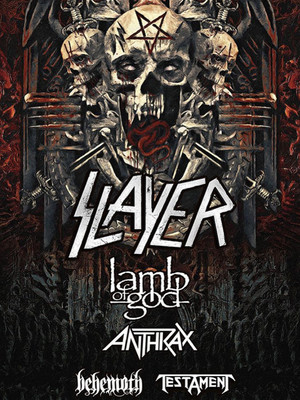 Get ready to head-bang one final time with Slayer!

After nearly 40 years heavy metal band Slayer are saying farewell to their fans and are embarking on the last leg of their mammoth Final World Tour! In their career Slayer have released 12 studio albums, four of which received gold certification in the United States. The band have also received five Grammy Award nominations, winning two of them for tracks 'Eyes of the Insane' and 'Final Six'.

Titled "The Final Campaign" this seventh leg of the group's quite huge tour kicks off this November in Asheville, North Carolina and will see Slayer sharing the stage with bands they've inspired over the years, including Primus, Ministry and Philip H.

The band wishes to thank their fans for all their support over the years, so get ready to head-bang with Slayer for one last time! This is definitely a tour any metalhead doesn't want to miss.

Awesome show all bands kicked ass with slayer blowing me away!! more

Sound good to you? Share this page on social media and let your friends know about Slayer at Madison Square Garden.