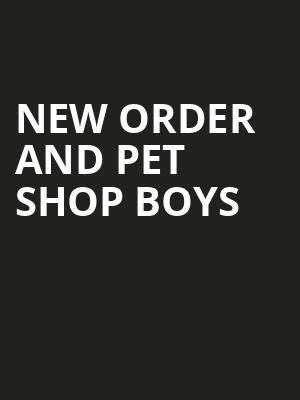 two of the defining acts of the U.K. post-punk and new wave scene

Pet Shop Boys and New Order are two giants of 80s-90s pop music, leading the UK post-punk and new-wave scene and leaving a lasting influence on the sound of British contemporary music. New Order were formed out of the ashes of Joy Division following the tragic suicide of singer Ian Curtis in 1980, but went on to assert themselves as a true musical and cultural force independent of their previous incarnation. Pet Shop Boys' emergence from 1980s London meanwhile saw a meteoric rise, winning a BRIT Award and Ivor Novello Award for their smash-hit 'West End Girls' just a few years after their first ever jams in Tennant's West London bedroom. Their latest album Hotspot was released in January 2020. Both bands have enjoyed worldwide success, with multiple gold and platinum selling albums between them.

Sound good to you? Share this page on social media and let your friends know about New Order and Pet Shop Boys at Madison Square Garden.