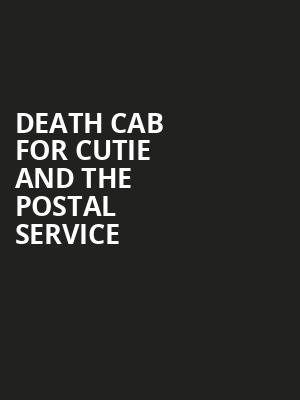 Death Cab For Cutie and The Postal Service

One for the Millenials!

Why See Death Cab For Cutie and The Postal Service?

In news that will find Millenials harking back to the nostalgic times of teen angst, indie behemoths Death Cab For Cutie AND The Postal Service are heading out on a joint tour in fall 2023. Celebrating 20 years of each band's 2003 seminal records (Death Cab's Transatlanticism and TPS's Give Up), this co-headlining tour will see the frontman of both groups, Ben Gibbard pull double a shift as he leads performances of the two albums, from start to finish!

20 Years of Indie Perfection
Death Cab For Cutie's fourth studio album, it was the long-distance romance-themed Transatlantiscism that flipped them into the mainstream, riding the cultural indie wave that came to dominate the alternative scene at the time. With appearances on The O.C and glowing reviews across the board, it cemented Death Cab's place at the top of the indie tree. Alongside The Postal Service's record of electro infused raw lyricism, Give Up, Gibbard remarked  " I know for a fact I will never have a year again like 2003...The Postal Service record came out; Transatlanticism came out. These two records will be on my tombstone, and I'm totally fine with that. I've never had a more creatively inspired year."

Seen Death Cab For Cutie and The Postal Service? Loved it? Hated it?

Sound good to you? Share this page on social media and let your friends know about Death Cab For Cutie and The Postal Service at Madison Square Garden.