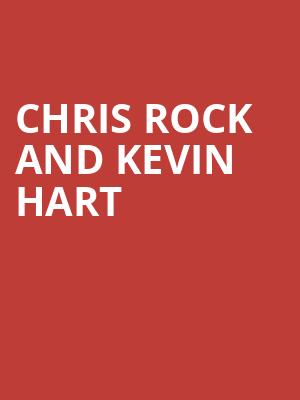 Two titans of modern stand-up together on stage!

Stand-up history will be made this summer as man-of-the-moment Chris Rock teams up with fellow comedy great Kevin Hart for this strictly limited co-headlining tour around New York and New Jersey. Titled 'ROCK HART: Only Headliners Allowed' these two titans will go head to head on stage, bringing together their respective 2022 tours - Hart's Reality Check and Rock's Ego Death - for one epic and hilarious showdown!

Speaking of the tour, Kevin Hart enthused; 'When Chris and I realized we were both going to be on tour this year we immediately knew we needed to do something special. We have been friends and mentors to each other for 20 years, but we have never shared a headlining stage together until now!!! I cannot think of a better way to celebrate the return of live comedy than to co-headline a show with my brother Chris Rock. This is a major moment in comedy and one for the history books.' We couldn't agree more!

Seen Chris Rock and Kevin Hart? Loved it? Hated it?

Sound good to you? Share this page on social media and let your friends know about Chris Rock and Kevin Hart at Madison Square Garden.