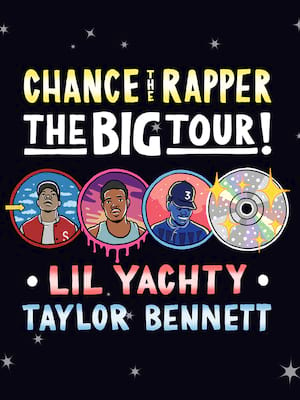 Why See Chance The Rapper?

Eschewing sparse electronic pop-orientated hip hop for lush retro beats and a vibrant, melodic rapping style, Chicago MC Chance The Rapper, aka Chancellor Bennett, has finally released his first fully-fledged studio album! The Big Day not only symbolizes Chance's graduation from mix-tape to studio album but also his move from boy to man, husband, and father, and further still into a new and exciting time in his musical career. Now the 26-year-old star is heading out on his The Big Day tour!

The Big Day is entirely inspired by Chance's wedding to his longtime sweetheart Kristen Corley. Talking to Zane Lowe on Beats 1 he said: "The whole album has been inspired bu the day I got married and how I was dancing that day." Inspired by such a momentous occasion, and the fact that it's his first studio album, the multi-Grammy award winner didn't hold back when it came to guest appearances. This star-studded 22 track album features the likes of Nicki Minaj, Gucci Mane, John Legend and Randy Newman!

Seen Chance The Rapper? Loved it? Hated it?

Sound good to you? Share this page on social media and let your friends know about Chance The Rapper at Madison Square Garden.