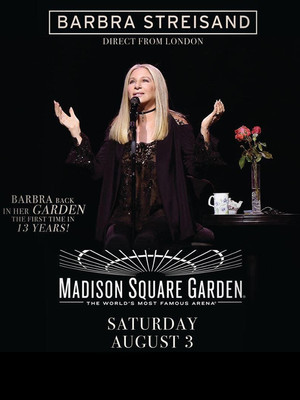 For one Night Only

Barbra Streisand returns to Madison Square Garden for the first time in 13 years this summer for one night only! One of the world's most iconic recording artists, actors, philanthropist and advocates, this exclusive concert will debut some of Streisand's new music as well as her classic hits. As with any Streisand concert, there is sure to be anecdotes from her six-decade career and lots and lots of laughter! This is one not to be missed!

First recognized for her talents as 'the girl on the block with the good voice' in her native New York, Streisand was determined to become a star, leaving home at 16 and finding work in the city's cabaret clubs. It wasn't long before Broadway came a-knocking, giving her the chance to show off her pipes to larger audiences and expand on her first love, acting.

Since the early 1960's she has been a fixture of popular culture, releasing myriad songs, albums and captivating audiences with her stellar turns on the silver screen in Hello, Dolly!, A Star is Born, Funny Girl and many more, and selling over 245 million records the world over.

Barbra Streisand is one of the only artists ever to receive an Oscar, Tony, Emmy, Grammy, Directors Guild of America, Golden Globe, National Medal of Arts and Peabody Awards as well as France's Legion d'Honneur and the American Film Institute's Lifetime Achievement Award. She is the recipient of two Oscars, five Emmys, ten Grammys, a Tony and nine Golden Globes including the Cecil B. DeMille Award. She is also the first female film director to receive the Kennedy Center Honors. The three films she directed received 14 Oscar nominations.

Sound good to you? Share this page on social media and let your friends know about Barbra Streisand at Madison Square Garden.