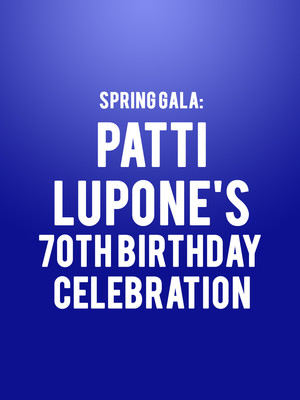 Patti LuPone knows a stage like koalas know gum trees and pandas bamboo. It's her natural habitat, her instincts taut and senses zinging. She owns it, commands it, nurtures it and prowls it so completely that you'd think she was born on one.

It's hard to believe that Patti LuPone is on the eve of turning 70 years old. Her wit, vim and vigour truly belie her age, but when you look at the wealth of achievements that make up her stellar career its slightly easier to wrap your head around. For nearly five decades the vivacious performer and her sonorous voice has reigned on stage and screen, garnering two Tonys, amongst Grammys and Olivier Awards, for originating the role of Eva Peron in the 1979 original Broadway production of Evita and for her stint as Mama Rose in the 2008 Broadway revival of Gypsy.

The New York Philharmonic welcomes the icon for a special one-night-only birthday celebration, performing highlights from her storied time on the Great White Way. Together the ensemble will conjure musical theatre magic with nostalgic renditions of 'Don't Cry For Me Argentina', 'The Ladies Who Lunch' from Company, 'The Worst Pies In London' from Sondheim's Sweeney Todd and 'I'm Easily Assimilated' from Candide, amongst others. Don't miss this chance to see a living legend do what she does best!

Sound good to you? Share this page on social media and let your friends know about Spring Gala: Patti Lupone's 70th Birthday Celebration at David Geffen Hall at Lincoln Center.