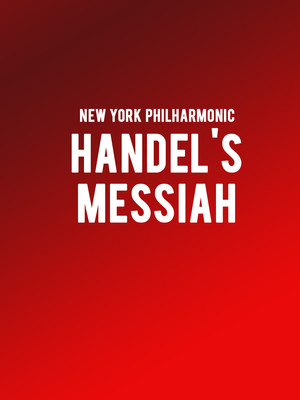 On May 5, 2010, the New York Philharmonic performed its 15,000th concert. No other orchestra comes close to matching that number.

Conducted by Harry Bicket, the acclaimed New York Philharmonic Orchestra performs George Frideric Handel's signature oratorio. As one of New York City's many yuletide traditions, the NY Phil's annual Messiah concert is a fantastic way to enjoy the season in the company of this world-class collective.

The piece was first performed in 1742 in Dublin and has since become a firm favorite among classical music lovers. The piece is an oratorio, which is a musical work similar to an opera but performed utilizing the vocals of both soloists as well as a choir, and often without the same narrative structure as an opera. Expect vocal fireworks as this hair-raising piece fills David Geffen Hall once more this Christmas.

2 hours and 30 minutes, with intermission

Sound good to you? Share this page on social media and let your friends know about New York Philharmonic - Handel's Messiah at David Geffen Hall at Lincoln Center.