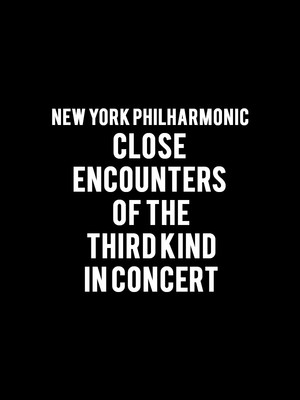 ...the view from the mountaintop remains remarkable: grand celestial theatre, in which the greatest storyteller in modern movies invites us to set aside any scepticism, look up, and believe.

Why See New York Philharmonic - Close Encounters of the Third Kind in Concert?

We Are Not Alone

In 1977 Steven Spielberg's high-flying sci-fi spectacular re-defined what a cinematic blockbuster could be. Without copious amounts of CGI and obvious effects fanfare, every day locations and object tell the story along side an incredibly memorable five-note theme composed by movie score legend John Williams. Experience Williams' genius live during a special HD screening of the film replete with orchestral accompaniment by the New York Philharmonic and renowned conductor/film and TV composer Richard Kaufman.

Filled with suspense, the thriller of a film blends fear of alien abduction with the uncertainty of attempting to face and commune with a species intellectually superior to our own. When local electrical lineman Roy Neary inspects a series of unexplained power outages in Indiana, he comes face to face with a UFO. Refusing to accept any other explanation, he becomes obsessed and is prepared to give up his job, family and life to pursue the truth. Unbeknownst to Roy, a group of scientists have made contact with startling results.

Sound good to you? Share this page on social media and let your friends know about New York Philharmonic - Close Encounters of the Third Kind in Concert at David Geffen Hall at Lincoln Center.