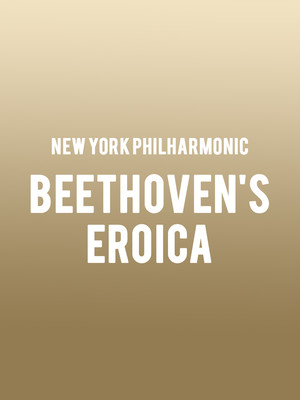 The achievement of the Eroica is not that Beethoven "unifies" all of this diversity, but rather that he creates and unleashes a symphonic energy in this piece that both frames and releases this elemental human drama.

Embarking on his inaugural year as music director of the New York Philharmonic, world renowned Danish conductor Jaap van Zweden keeps up a lively pace with a program centred around Beethoven's gloriously exultant Eroica Symphony. Completed in 1804, the large-scale landmark work is one of the composers most revered compositions, and, thanks to its roots in the classical tradition as well as its visionary use of harmony and form, is widely regarded as a turning point in the transition between the Classic era and the Romantic era.

The symphony began life as a tribute to Napoleon, but when the revolutionary French leader turned tyrant, Beethoven scribbled out the name of his original dedicatee, instead focusing on the trials, tribulations and triumphs of the human spirit. It's considerable length, technically demanding playing and uncompromising aesthetics, from the angular dissonances of the first movement to the expressive range and explosive climax of the fourth, forced early audiences to rethink what a symphony should be - i.e. not just a decorative form of entertainment, but an earth-shattering and challenging intellectual pursuit.

Sound good to you? Share this page on social media and let your friends know about New York Philharmonic - Beethoven's Eroica at David Geffen Hall at Lincoln Center.