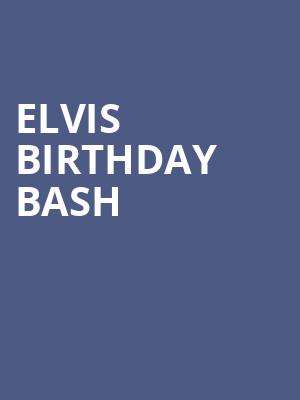 Celebrate The King's Birthday In Style

Relive Elvis Presley's musical moments with Blue Suede - the Premiere Elvis Birthday Bash, one of the finest Elvis Presley tribute acts in the biz! Comprised of veteran impersonators Scot Bruce and Mike Albert, who perform as the young and old versions of the blue-eyed icon, the outfit celebrates his birthday every year with a rollicking rock and roll concert that regularly has audience members shaking their hips in the aisles to heartfelt and accurate renditions of 'Hound Dog', 'Love Me Tender' and 'Jailhouse Rock' amongst other hit tunes!

Widely credited as rocketing rock and roll music to international attention in the 50s and 60s, Elvis became one of the highest-selling performers in history thanks to a distinctive warble, All American good looks and a stage swagger that may have started out as nerves but wound up as sensation-causing. A pioneer of the R&B and blues rockabilly fusion, Elvis' legacy is the stuff of pure legend. What with his constant string of hits, regular features on the silver screen and constant media domination for over two decades it's no wonder they called him The King!

Sound good to you? Share this page on social media and let your friends know about Elvis Birthday Bash at Bergen Performing Arts Center.