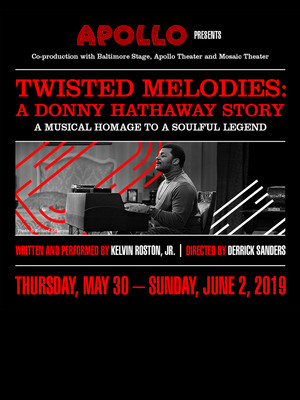 A powerful one-man show about the legendary Donny Hathaway

Kelvin Roston, Jr. is Donny Hathaway in this powerful one-man show. Based on the life and music of the legendary 70's soul singer Twisted Melodies delves into the man behind the music and his inner turmoils as he battles between his muses and his mental health.

Best known for his duets with Roberta Flack, Donny Hathaway was a prolific musician back in the 1970's. Forever battling with inner demons, Hathaway unfortunately committed suicide at the age of 33, this wasn't before he had built a glittering career for himself. With hits like "The Ghetto", "This Christmas", and "You've Got a Friend" Hathaway became one of the most influential soul singers of his era, with the Whispers even recording a tribute called, "Song for Donny" and featuring it on their break-through album.

One hour and 30minutes, with no intermission

I saw this playi in Chicago. I really enjoyed it. The vocals were phenomenal... more

Mardra Thoamas: “Twisted Melodies,Step inside the mind of this musical master”

Sound good to you? Share this page on social media and let your friends know about Twisted Melodies at Apollo Theater.