You are viewing a past performance of Alanis Morissette

You can catch Alanis Morissette at the Northwell Health, showing June 26, 2020 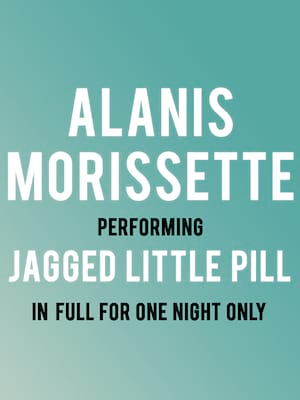 The '90s icon performs her seminal album in full!

for one night only

'90s pop-rock icon Alanis Morissette is lighting up the Apollo Theater for one-night-only this December as she performs her seminal album, Jagged Little Pill in full! This extra-special acoustic concert comes in celebration of Morisette's brand new musical, which shares the same name as the album, opening on Broadway on December 5!

Book tickets to Jagged Little Pill, The Musical at the Broadhurst Theater.

Released in 1995 Jagged Little Pill cemented Morissette as one of the era's most exciting artists. With hits like "Ironic", "You Oughta Know" and "Head Over Feet" Morissette demonstrated her evocative talent in songwriting and emotional resonance, becoming the soundtrack of a generation and racking up 33 million album sales!

But, that's not all! The set will be followed by an intimate Q&A with Alanis Morissette herself! Don't miss your chance to be a part of this once in a lifetime event and book your tickets today!

Sound good to you? Share this page on social media and let your friends know about Alanis Morissette at Apollo Theater.