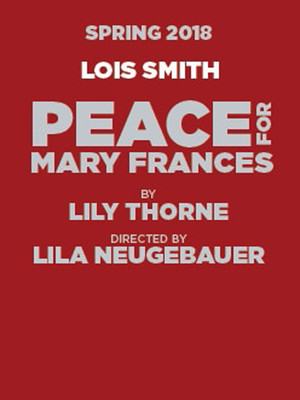 Why See Peace for Mary Frances?

Lois Smith takes the lead in this poignant and hysterically funny comedy-drama, that explores the tempestuous relationships between a New England matriarch and her family. Lily Thorne's latest world premiere will be under the helm of in-demand director Lila Neugebauer, whose previous credits include 2015's Kill Floor, The Aliens, The Valley of Fear, Trudy & Max in Love and many others. Smith's most recent role was in Jordan Harrison's 2015 drama Marjorie Prime. This newest play will form part of The New Group's Spring 2018 season.

Ninety year-old Mary Frances is ready to die, having lived a good and fulfilling life. Born to refugees fleeing the Armenian genocide, and learning the trauma that they went through, she is determined to fulfill her last wish; to die peacefully at home surrounded by her family. However, her best laid plans indeed go awry as three generations of fiesty and determined women invade her home, each trying to get their hands on her possessions.

Faced with anything but a peaceful last few days on earth, Mary Frances is forced to play referee between her children, with tensions and jealousies all reaching boiling point; will she be able to broker peace before she departs her mortal coil? T

We loved the play. There were 3 of us and we couldn't stop talking about... more

Who doesn’t want to see Aunt Meg on stage? I love Lois Smith and she... more

Sound good to you? Share this page on social media and let your friends know about Peace for Mary Frances at Alice Griffin Jewel Box Theatre.