You have until May 29 to book your tickets

Mrs Doubtfire's Broadway run will soon come to an end following its not so smooth ride.

The musical adapted from 1993's popular film began preview performances on March 9, 2020 - and we all know what happened around that time. Doubtfire was forced to close three days after previews began and resumed performances over a year later in October 2021, but the closures didn't end there - it then stopped again on January 9, 2022 and reopened for its third and final attempt on 14 April, 2022. The rollercoaster is to make one final stop on May 29 when Mrs Doubtfire will close her doors one last time at the Stephen Sondheim Theatre, this time for good.

If you weren't able to catch the Broadway production, Mrs Doubtfire is heading across seas for a British engagement, playing from September 2 to October 1 in Manchester, England before heading out on a US national tour in October 2023.

What is mrs doubtfire about?

Starring Sally Fields and the late great Robin Williams, Mrs. Doubtfire was an instant hit on its release, capturing audiences hearts with the story of Daniel, a recently divorced dad who comes up with a novel way to spend more time with his kids - becoming their elderly Scottish nanny - Mrs. Euphegenia Doubtfire! Charming his way into their lives, he soon becomes a fixture. But when questions start to arise about just who this Mrs. Doubtfire is, it looks like he's gonna need a lot more than a makeover to hide from this fallout. 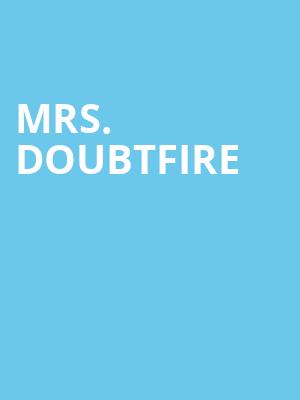