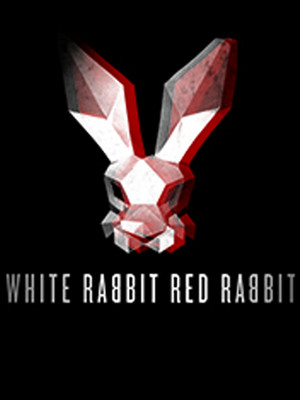 No rehearsals. No Director. No Safety Net. Closes December 19.

A dazzling array of stage and screen talent star in this New York premiere at the Westside Theatre. An utterly original show, White Rabbit Red Rabbit has no director, set or rehearsals. Instead, the play's sole performer is handed the script for the first time as they step onto the stage. Exploring themes of obedience and convention, this unique concept allows the actor and audience to discover the play at the same time, and for the writer's voice to be rendered completely differently at every single performance.

The piece was created by Iranian playwright Nassim Soleimanpour in 2010, during a time when he was barred from leaving Iran because he had refused to do military service. Unable to travel, he sent the play abroad in his stead, and it's since been performed the world over and translated into over a dozen languages. Nassim finally gained a passport in 2012, and actually saw White Rabbit Red Rabbit live for the first time a year later in Brisbane, Australia.

Taking to the stage with nothing more than the script in their hands and a whole lot of theatrical talent are some of entertainment's finest. Among those who've taken the plunge during this Off-Broadway run are Nathan Lane, Whoopi Goldberg and Martin Short.

Recommended for ages 12+. Children under the age of 4 are not permitted in the theatre.

75 minutes with no intermission

Sound good to you? Share this page on social media and let your friends know about White Rabbit Red Rabbit at Westside Theater Downstairs.