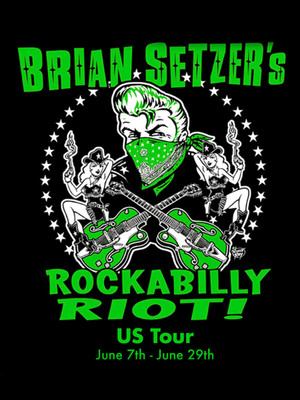 The king of Rockabilly!

A true chameleon of vintage rock, the irrepressible Grammy-winning Brian Setzer has effectively resurrected the concept of rockabilly and swing music from the annals of time, helping create a new sub-culture amongst younger generations! Fusing original rockabilly and his own unique style, Setzer been cited as the greatest living blues guitarist by Guitar World, having sold over 13 million LPs, and even launching his own model of Gretsch guitars.

Brian Setzer is one of those geniuses who keeps the Earth properly spinning on its axis through his wildly innovative guitar-playing and off-beat humor. Launched in the 1990s, the Brian Setzer Orchestra is an 18-piece swing and jump blues band comprised of Setzer himself (of course) as well as a whole cacophony of talented musical accomplices. With a career spanning more than 30 years, Setzer has hits as founder/leader of The Stray Cats, his 18-piece Brian Setzer Orchestra and as a solo artist.