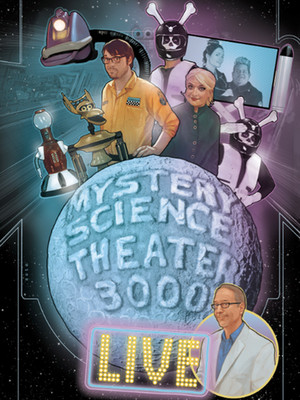 They must've spent tens of dollars on this.

Are you looking to board the Satellite of Love once more for a riff-fest experience like no other? Then seek no further, for the Mystery Science Theater 3000 crew are bringing their unique comedy show to a theatre near you this year. Join Joel, Tom Servo, Crow.T Robot and Gypsy for a screening of a fan-favorite movie you'll love

wait, what is this?

First created in 1988 by Joel Hodgson, MST3K is ostensibly the story of a janitor who has been kidnapped by two mad scientists and forced to watch cheesy Sci-Fi B movies aboard their spaceship, Satellite of Love. To stave off the boredom of this existence, he creates himself a plethora of robot pals to watch along with him and create new plotlines and scripts as the movie plays. With writers on the new series including superfan Elliot Kalan, Joel Mchale, Dana Gould and many more, expect all of the wisecracking, plot twists, silly characters and schoolboy jokes you've come to love

What a perfect venue! Practically got shivers as Joel Hodgson walks on... more

It was cool the way they brought the show to the stage. The timing of... more

Sound good to you? Share this page on social media and let your friends know about Mystery Science Theater 3000 Live at Wellmont Theatre.