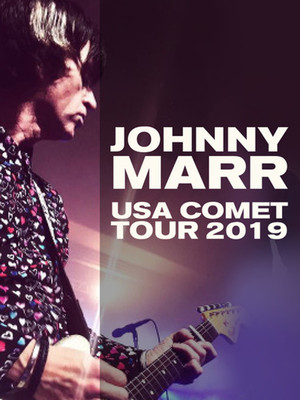 Famous The Smith's guitarist Johnny Marr heads out on tour in 2019!

The famous Johnny Marr is heading out on tour in 2019 in support of his 2018 release Call The Comet. Heralding from the heady days of The Smiths Call The Comet is the musician's third solo album.

In a varied and climatic career, Marr has drifted through many projects. With his most famous obviously being The Smiths, Marr has performed with and created sub-bands like The Pretenders, The The, Electronic and his most recent (and still an ongoing project) Johnny Marr and the healers plus many more.

In a poll conducted by the BBC in 2010 Marr was voted the fourth best guitarist in the last 30 years, with NME honoring the star with its "Godlike Genius" award in 2013. The rockstar has also been awarded a further four NME awards, Award For Best Book, Award For Best Songwriter (in 1985 and 1985) and the NME Award for Best Instrumentalist. As he continues to push musical boundaries Marr retains his influential status, inspiring musicians across the world, this latest tour is not one to be missed!

Some venues are age restricted, please check before purchasing tickets.

Sound good to you? Share this page on social media and let your friends know about Johnny Marr at Wellmont Theatre.