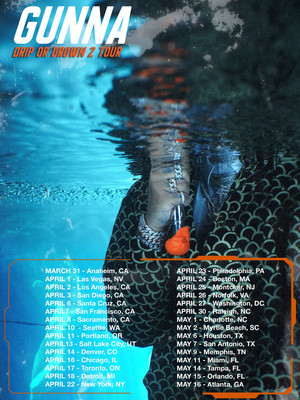 Gunna is known for championing the slang term "drip" to describe his ever-stylish garms; his delivery chimes perfectly with the aquatic metaphor.

Born and raised in College Park, Georgia Southern Rap up and comer Gunna began making music at the tender age of 15, fusing the soulful sounds of his influences Outkast and Cam'ron to make his professional debut in 2016. A chance meeting with Atlanta rapping icon Young Thug sparked friendship between them, leading to Gunna landing a verse on YG's future swag-filled smash hit 'Floyd Merryweather' alongside hip hop heavyweights Gucci Mane and Travis Scott.

Following the February 2019 release of his debut album 'Drip or Drown 2', Gunna is hitting the road on a mammoth North American Tour, bringing along D.C. rapper Shy Glizzy as support. Hailed as a triumphant justification of all the hype Gunna has been drumming up over the past three years, the album enshrines the 'get rich or die trying' gangsta rap attitude in the performer's hypnotic monotone. Rich in storytelling and polished production, its a sign of bigger and better things to come.

Seen Gunna? Loved it? Hated it?

Sound good to you? Share this page on social media and let your friends know about Gunna at Wellmont Theatre.