Sorry! You missed The Heavy at Webster Hall 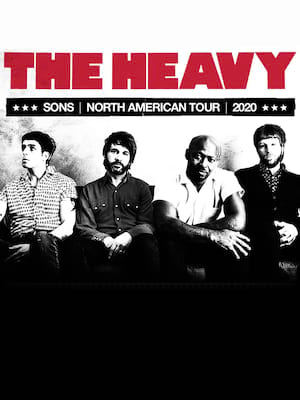 Stop what you're doing and listen to The Heavy

Why See The Heavy?

The band behind insanely catchy single 'How Do You Like Me Now', The Heavy are a four-piece from hailing from the picturesque city of Bath, England. The only group to have ever been asked by David Letterman to perform an encore on his show, the neo-soul rockers are celebrating with a world tour that brings them to US shores for a series of much-anticipated dates.

More than just a one-trick pony, the guys, Kelvin, Spencer, Dan, and Chris are riding high on the release of their 5th album, Sons, so expect to hear tunes from that, and of course, their funk-infused back catalog, excellently led by Kelvin's gravelly vocals - bring your dancing shoes!

Seen The Heavy? Loved it? Hated it?

Sound good to you? Share this page on social media and let your friends know about The Heavy at Webster Hall.