Sorry! You missed My Fair Lady at Vivian Beaumont Theater 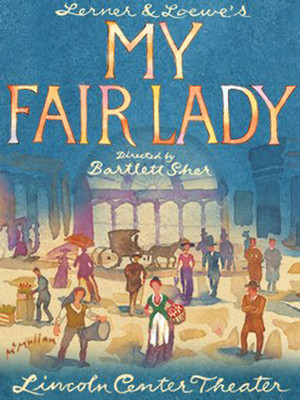 Benanti is a more effortless vocalist; she dispatches her very difficult and wide-ranging songs with glee

Why See My Fair Lady?

It's Going To Be Loverly!

Tony-winning director Bartlett Sher (The King and I, Fiddler on the Roof) helms this brand new production of Loewe and Lerner's timeless classic for Lincoln Center Theater. Based on George Bernard Shaw's Pygmalion, My Fair Lady follows the burgeoning friendship between phonetics professor Henry Higgins and his pupil, the cockney flower girl Eliza Doolittle.

Regarded as one of the greatest musicals of all time, this jubilant show features the songs 'Wouldn't it be Loverly', 'I Could Have Danced All Night', and 'The Rain in Spain'. It premiered on Broadway in 1956, with Julie Andrews in the role of Eliza, and won six Tony Awards, and was subsequently adapted for the silver screen, with the cast led by Audrey Hepburn and Rex Harrison.

What is My Fair Lady About?

For Professor Henry Higgins, a person's voice is of the utmost importance. A student of phonetics, he holds the opinion that with the right accent and tone of speech, anything is achievable. To prove his point, he wagers a friend that he can teach cockney flower girl Eliza Doolittle to speak 'properly', and then present her as an upper class lady at a high society ball. So the pair's lessons begins, but little does Henry Higgins know, that their time together will change him just as much as it does her!

While Julie Andrews won huge acclaim for her Eliza on Broadway, she was never in contention to reprise the role on film. Audrey Hepburn was one of Hollywood's brightest stars, and as producer Jack Warner wrote in his autobiography, "In my business I have to know who brings people and their money to a movie theatre box office." Audrey Hepburn's singing was then famously dubbed in the final cut of the movie.

My Fair Lady is suitable for audiences of all ages, children under 4 are not permitted in the theatre

Two hours and 55 minutes with one intermission

Outstanding Revival of a Broadway of Off-Broadway Musical

This is theatre at its best!

My Fair Lady, the musical adaptation of Bernard Shaw's famous play Pygmalion, first opened on Broadway in 1956 with Julie Andrews and Rex Harrison. While I wish I could say I was around for that I imagine that my memory stems from the film I saw as a chi

Wonderful dinner at Bar Boulud across the street. Fantastic theater at... more

Sound good to you? Share this page on social media and let your friends know about My Fair Lady at Vivian Beaumont Theater.