From your city, New York City, NY to anywhere in the world! 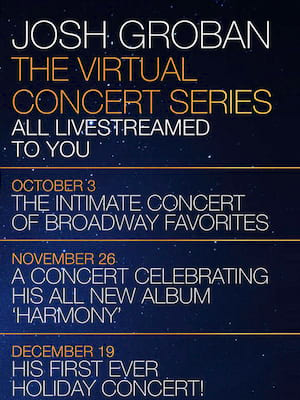 Join an exclusive and intimate online concert with Josh Groban!

Josh Groban's virtual concerts return with three new dates! With his 2020 tour on hold, Josh Groban is taking to the digital stage to host three intimate and exclusive online concerts. The series will include one Broadway concert, one celebrating his new album, and a special Holiday concert. Book today to be part of it!

With over 20 million records sold in the US, Josh Groban is arguably the most popular singer-songwriter in the country after hits from his five albums, including 'Closer' and 'Awake'. He's also one of the few classical singers to have successfully managed to transition to Broadway, having stared in the 2016 epic Natasha, Pierre & The Great Comet of 1812.

Sound good to you? Share this page on social media and let your friends know about Josh Groban: An Intimate Concert Event at Virtual Broadway Experiences.