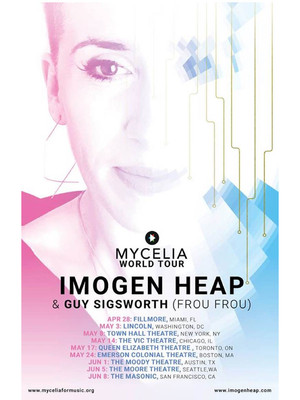 Imogen Heap: saviour of the music industry? In our age of Spotify, most artists fail to get a fair deal. But with help from coders, Imogen Heap is leading the fightback

Forward-thinking electro pop pioneer Imogen Heap returns to the stage for the first time in nine years! In keeping with her innovative creative spirit, the Mycelia World Tour celebrates the launch of Mycelia's Creative Passport, an artist-led digital container that holds profile information, works, acknowledgements and payment processes that aid music makers in getting their works out into the constant technologically-shifting industry and promote fair operating practices. The tour features live performances from Frou Frou, Heap's experimental electronic outfit with composer Guy Sigworth, as well as moderated talks in which Heap is set to explore how technology influences music and vice versa, and music maker and family coding workshops.

Beginning her fascinating musical journey in the early 2000s, Heap's classical training collided with her love of alternative pop, rock and electronica, making for a distinctive sound that emerged with the release her debut album 'I, Megaphone' and subsequent releases with collavorative project Frou Frou. Unafraid of fusing technology with sound, Heap's experimentations include the use of samples of everyday sounds sent in by fans for her fourth album Sparks as well as the creation of the Mi.Mu gloves, which connect with a musical interface and allow the user to create music with hand gestures and movements.

This was easily made my 10 best lifetime concerts list. I was blown away... more

an amazing artist, whose brilliance was upstaged by endless distractions... more

Sound good to you? Share this page on social media and let your friends know about Imogen Heap at Town Hall Theater.