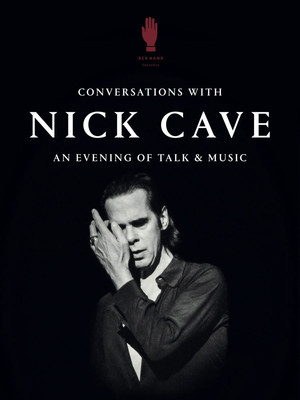 Nick Cave's intimate Conversations show is bold, enlightening and completely gripping. He speaks a lot about grief, but these shows are about growth.

Why See Conversations with Nick Cave?

Australian Prince Of Rock and Roll Darkness Nick Cave is once again returning to the stage, but this time he's leaving his backing band The Bad Seeds at home and embarking on The Conversations With Tour, a series of intimate discussions and Q&A sessions with fans across North America. Describing the forthcoming trek as "an exercise in connectivity", Cave will bare his soul, encouraging his fans to be confrontational, bold and courageous with their questions - nothing is off limits!

In between questions and conversations, Cave will perform stripped down versions of hit songs from throughout his career which spans his time as the frontman of post-punk gothic rockers The Birthday Party in the late 70s, the creation of career-defining band Nick Cave and The Bad Seeds in 1983, his collaborations with fellow antipodean Kylie Minogue on the Murder Ballads in the late 90s and beyond. Don't miss this chance to pick the brains of a twisted genius!

Seen Conversations with Nick Cave? Loved it? Hated it?

Sound good to you? Share this page on social media and let your friends know about Conversations with Nick Cave at Town Hall Theater.