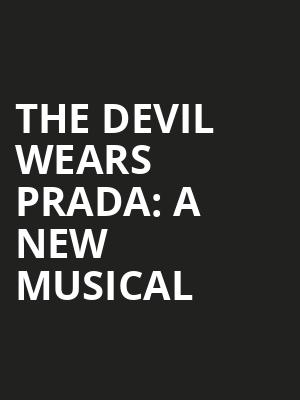 Everyone wants to be us

Why See The Devil Wears Prada: A New Musical?

With music by elton john

Dates and venue to be confirmed

Hold onto your Christian Louboutin's because the iconic 2006 movie, The Devil Wears Prada is receiving a totally Chanel musical makeover! And if that's not enough THE Elton John is lending his song-writing genius to the project which will also feature lyrics from Shaina Taub and a book by Paul Rudnik. Directed by Tony award-winner Anna D. Shapiro, The Devil Wears Prada: A New Musical is set to be the most gorgeous theatrical event of the year!

Based on the best-selling novel by Lauren Weisberger The Devil Wears Prada was the stand-out movie hit of the year. Starring the likes of Anne Hathaway and Emily Blunt, with an Oscar-nominated and Golden Globe-winning performance from Meryl Streep, the movie grossed over $300 million worldwide.

When ambitious young writer Andy lands a job as a personal assistant to the infamous Miranda Priestly (the editor-in-chief of the prestigious Runway Magazine) she is thrown into a world unknown. Surrounded by expensive clothes and snooty fashionistas, Andy must navigate the demands of her tightly strung boss. With her eyes on the prize, to last one year in her position so that she can get her dream job as a journalist, it's time for Andy to throw away her knitted cardigans and smart shoes and dive into the world of fashion.

Seen The Devil Wears Prada: A New Musical? Loved it? Hated it?

Sound good to you? Share this page on social media and let your friends know about The Devil Wears Prada: A New Musical at Venue To Be Announced.