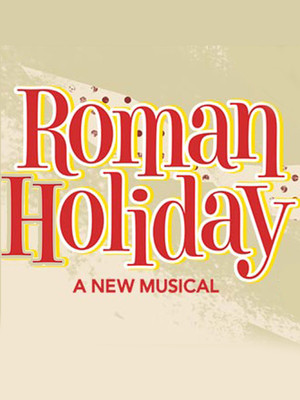 Cole Porter fans, hold onto your hats! This brand-new musical brings the Academy Award-winning movie that starred Audrey Hepburn and Gregory Peck to Broadway, following its San Francisco premiere in May. Follow the adventures of a restless European princess who escapes the confines of her traveling party - only to meet a grizzled American journalist sent to cover her trip. With classic tunes including Night and Day, Ev'ry Time We Say Goodbye, it's time to fall in love all over again!

With a book by Kathy Speer, Terry Grossman and Paul Blake, we meet a beautiful princess who is on yet another annual, busy but extremely strict tour of Europe. Striving for a little semblance of freedom like normal girls her age, she slips away instead of attending yet another a diplomatic ball.

Meanwhile, a disgruntled American journalist sent to cover the royal family's tour across Europe finds the scoop of his career when he happens upon the princess sleeping on a park bench. Not recognizing her, he takes her home to rest. The next day, news of the princess' escape breaks, and he realises who the girl really was. Now determined to be the first to find and interview her, he joins the scramble. However, when he does find her, he recognizes a kindred spirit within, and whilst both trying to elude the agents, the paparazzi and the police, they embark on an exciting spree around Rome, and fall in love in the process.

This will be the second staging of this musical in the States; the original production to use Cole Porter's songs actually premiered in 2002 at Minneapolis' Guthrie Theater, starring Stephanie Rothenberg as Princess Ann and Edward Watts as reporter Joe Bradley.

Sound good to you? Share this page on social media and let your friends know about Roman Holiday at Venue To Be Announced.