Sorry, it looks like 13 Going on 30 is no longer happening on these dates 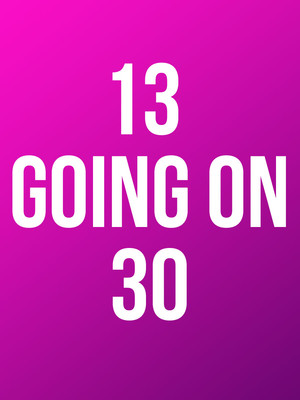 Geeky girls unite - the hit 2004 movie is getting its own Broadway musical!

Official dates and venue yet to be announced

Behold, time travellers, as the surprise hit movie of 2004 starring Jennifer Garner is making its way to Broadway in 2017, in a brand-new stage musical adaptation! Penned by the original screenwriters Josh Goldsmith and Cathy Yuspa, the music and lyrics will be provided by musical dream team Alan Zachary and Michael Weiner, who were behind recent successes such as First Date and 17 Again. With Andy Fickman set to direct, it will be produced by Revolution Studios, Dean Stolber, and Todd Garner, with further creative and the cast yet to be announced.

Ever wished that you could fast-forward in time when you were stuck at school? This is the case of one such middle-schooler, Jenna Rink, a gawky 13-year old who finds herself humiliated after her birthday party ends in tears by the nasty kids at school. Crying herself to sleep while wishing herself that she were 30 years old, lo and behold, she awakens up to find herself just five days shy of her 30th birthday, with absolutely no idea how she got there!

So begins a wild ride through her newfound adulthood as the star writer at her favorite teen magazine poise, with thrills, spills and just a hint of romance to lighten her way. However, within the intervening 17 years, she finds that her past friendships have all but disappeared, and that she was in fact part of the nasty gang of girls at school, and grew up to be spoiled and selfish to boot.

Released in 2004, the movie received positive reviews from critics for its leading lady Jennifer Garner and supporting cast, which included Mark Ruffalo, Andy Serkis and Judy Greer, as well as for its touching and comedic story about love and forgiveness - perfect we think, for a Broadway musical!

Sound good to you? Share this page on social media and let your friends know about 13 Going on 30 at Venue To Be Announced.