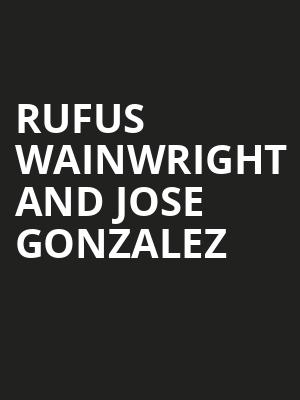 Unfollow The Rules in The Local Valley Tour 2021

Two of the most influential singer-songwriters of their generation unite this fall for the extra-special joint tour, entitled; 'Unfollow The Rules in The Local Valley'. Expect a glorious evening in the company of these two - from Gonzalez's acoustic magic to Wainwright's theatrical infused genius - it's sure to be an unforgettable return for both!

Rufus Wainwright's lush, theatrical pop harks back to the traditions of Tin Pan Alley, cabaret, and even opera. Son of Loudon Wainwright III and Kate McGarrigle, brother to musical sibling Martha, songwriting is in his blood. He remains firmly out of their shadows though, with a folk legacy of his own that includes seven studio albums and a fully-fledged opera.

After first coming to mainstream attention when his ebullient folky cover of The Knife's 'Heartbeats' was used to soundtrack 250,000 bouncy balls cascading down San Francisco's Filbert Street for a Sony advert, Jose Gonzalez has become recognized as an eccentric musician who thrills with a mix of classical guitar and soft melodies.

Image by NikolayFrolochkin from Pixabay

Seen Rufus Wainwright and Jose Gonzalez? Loved it? Hated it?

Sound good to you? Share this page on social media and let your friends know about Rufus Wainwright and Jose Gonzalez at The Rooftop at Pier 17.