Sorry! You missed Papa Roach at The Rooftop at Pier 17 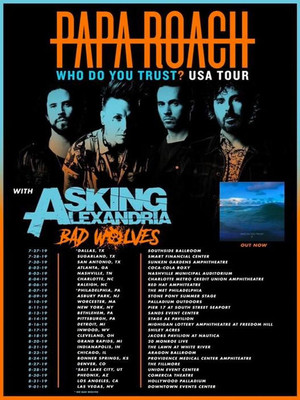 Papa Roach parade on stage at the O2 Forum as if it's their hometown, engaging with the fans and making the audience feel at one. Their presence radiates joy and well-being; not something often felt from music of the alternative genre.

Hot off the Back off Their New Album, Papa Roach Prepare to Tour America

Californian rockers Papa Roach have beginnings all the way back in 1993. Since their inception, the band has enjoyed many successes, amongst them, selling 20 million albums worldwide and being nominated for two Grammy Awards in 2001. The four-piece are known for their hits 'Last Resort, 'Getting Away with Murder,' 'Scars' and 'Forever' and will be heading on tour this summer.

Papa Roach released their latest musical effort, 'Who Do You Trust?' at the start of the year, the 10th studio album was described as taking "a few mightily deep dips into every era of the band's past" by Kerrang.

The band will be joined by fellow rockers from across the pond Asking Alexandria who formed in 2006 and are known for their songs 'From Death To Destiny,' 'Reckless & Relentless' and 'The Black.'

Sound good to you? Share this page on social media and let your friends know about Papa Roach at The Rooftop at Pier 17.