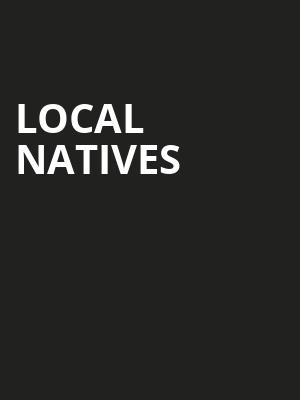 The L.A. band has long carried the flag for a particular strain of SoCal indie, but the follow-up to 2016's fashionably yearning Sunlit Youth sounds both more personal and more timeless.

inside an hourglass tour!

After forming a musical bond at the Orange County High School, singer Ryan Hahn, Guitarist Taylor Rice and keys player Kelcey Ayer went on to form Local Natives with drummer Matt Frazier and bassist Andy Hamm in 2008, debuting their vibrant, genre-bending sound with the release of their first album Gorilla Manor in 2009. A decade and a few more record releases later, the quintet are hitting the road on their Inside an Hourglass tour, the first live tour in three years!

Filled with the band's trademark soaring, sunny harmonies and neo-psychedelic grooves, Violet Street went back to the bands collaborative roots, relying on creative input from three songwriters and singers, as well as all five members. This translates to a super tight set when it comes to their live shows, which have a reputation for being high energy occasions that blend dancing with social activism and emotionally charged performances.

Sound good to you? Share this page on social media and let your friends know about Local Natives at The Rooftop at Pier 17.