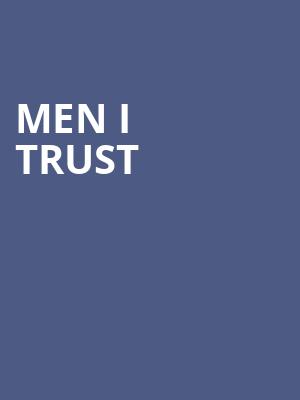 Why See Men I Trust?

bliss out to Dreamy Indie

Fresh from an incredible performance with Joey Bada$$ on Jimmy Fallon, Canadian indie dream-pop trio Men I Trust are on the road across North America, bringing their guitar-led, blissed out bops to a stage near you. The Montreal-based group, featuring guitarist/vocalist Emmanuelle Proulx, bassist Jessy Caron and keyboardist Dragos Chiriac bolster their line-up for the live shows with a drummer and second guitarist, fully immersing fans in their distinct, otherworldly sound.

Reminiscent of classic acts from the shoegaze era such as Cocteau Twins, as well as the tripped out electronica of artists such as Portishead, The band are one of the biggest things in Canadian indie right now, with their third album Oncle Jazz nominated for the Polaris Music Prize in 2020. Don't miss this opportunity to witness their subtle euphoria live.

Seen Men I Trust? Loved it? Hated it?

Sound good to you? Share this page on social media and let your friends know about Men I Trust at Terminal 5.